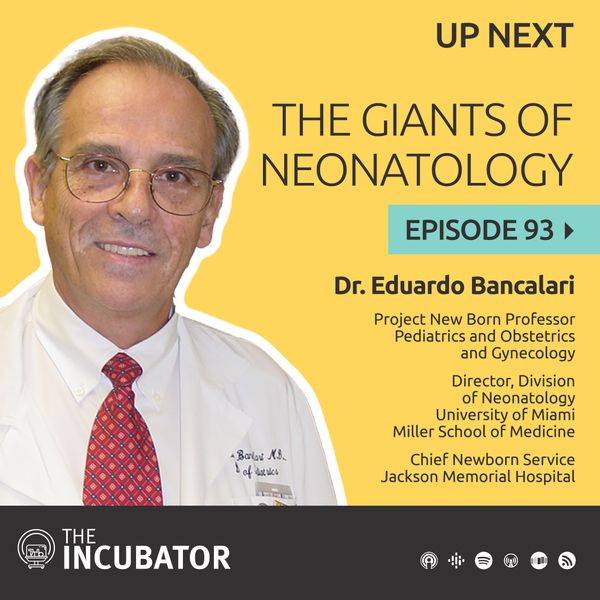 Daphna and I are happy to bring to you another episode from our Giants of Neonatology series. This week we havethe pleasure of hosting Dr. Eduardo Bancalari, from the University of Miami, whose work on bronchopulmonary dysplasia and on neonatal pulmonary pathophysiology has had a tremendous influence on our practice of neonatology and has help improve outcomes for nicu babies around the world. We hope you enjoy this interesting interview and thank you all once again for your continued support.

Bio: Dr. Eduardo Bancalari is the Project New Born Professor of Pediatrics and Obstetrics and Gynecology and Director Division of Neonatology at the University of Miami Miller School of Medicine and the Chief Newborn Service at Jackson Memorial Hospital.
He received his undergraduate and medical degrees from the University of Chile and then completed research fellowships in Respiratory Diseases and Physiology, at the Respiratory Center Maria Ferrer, Buenos Aires and University of Chile and in Pediatric Cardiology at the University of Miami.
He has served in numerous professional organizations including American Board of Pediatrics and Sub-Board of Neonatal-Perinatal Medicine.
Dr. Bancalari is Associate Editor for the Journal of Perinatal Medicine and sits on a number of editorial boards, including Neonatology, Revista Chilena de Pediatria and Jornal de Pediatria.
He has received several national and international awards including the Career Achievement Research Award, the Duane Alexander Award for Academic Leadership in Perinatal Medicine and the Erich Saling Award in recognition for outstanding contributions to the field of Perinatology.
Dr. Bancalari is the recipient of the 2003 Virginia Apgar Award from the American Academy of Pediatrics.
He is the author or co-author of more than 300 papers and book chapters in the areas of neonatal respiratory physiology, lung injury and respiratory care. He is the editor of The Newborn Lung published by Elsevier.
Dr Bancalari and his collaborators have developed one of the largest and most prestigious neonatal programs in the USA based at the University of Miami Jackson Memorial Hospital.
Through his continuous and active participation in educational activities, Dr Bancalari has made major contributions to the improvement of neonatal care in developing countries in Latin America.
Dr. Bancalari and Dr. Charles Bauer have organized “Miami Neonatology”, one of the most successful and longer lasting neonatal conferences in the world – celebrating 44 years in November. This program brings some of the most outstanding neonatal faculty from around the world and is attended by more than 1000 perinatal/neonatal professionals from over 40 countries.